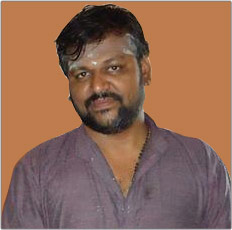 Sri Rajarajeshwara Swamiji is a very unassuming saint who spreads the message of Bhakthi and Prema where ever he goes. Swamiji was initiated into the world of Bhakthi and Jnana at a very tender age by his guru and grandfather Shri Madhavan Swamigal. He had his first vision of the lord when he was around 13 years old, and has been striving to act as a bridge between the lord and his creations ever since. He has taken part in many temple Kumbabhisekams and people from all walks of life come to him for words of solace and guidance. Swamiji is a good poet and has written many songs in praise of the lord . Many of these songs are sung by devotees during namasankeerthanams.

In order to full fill his vision of making each individual greener both inside and outside (அகமும் புறமும் பசுமை) Swamiji started the “Eshwara Peetam” in the year 2011.

Eshwara Peetam is a voluntary service organization functioning under the guidance of Swamiji with the objective of making this earth - happy, peaceful and green.

Ever since its inception in 2011, Eshwara Peetam has been undertaking projects which have been appreciated and replicated by many organisation and individuals depending upon their capacities.

Eshwara Peetam understands the importance of preserving the past ( ancient knowledge acquired from our Scriptures and texts) and learning the latest. All our projects are a perfect blend of ancient wisdom and modern science put together.