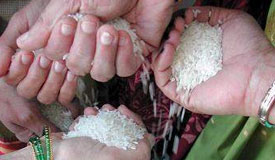 We at Eshwara Peetam are of the firm belief that the biggest Yajna (offering through fire) is Annadana Yajna. People offering food for the fire in the belly will be blessed more than people performing any other Yajna.

Kanchi Paramacharyar Sri Chandrasekarendra Saraswathi started a Yajna by name `Pidi Arisi Thittam" (handful of rice scheme). It was conceived with the poorest in mind. Every household was requested to keep aside a handful of rice and a humble coin before starting the day's cooking. Both the rice and the money were collected by a volunteer agency. While the rice was to be cooked in temple premises, offered as prasad to the deities first and then to the needy, the money would serve a socio-religious cause.

Eshwara Peetam considers it as its duty to follow the Paramacharyar’s footsteps in this direction. Our Annadhana Yajnam is also done by collecting this Pidi Arisi by our volunteers cooked and served to the needy people at various places and also during calamities like flood , tsunami etc.